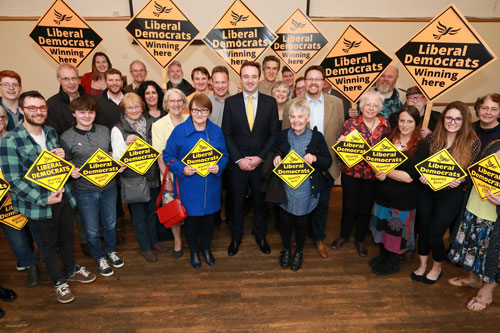 Danny Chambers was formally adopted as Liberal Democrat parliamentary candidate for North Cornwall at a packed party meeting in Camelford on Saturday 16 November.

At the event to mark the beginning of their general election campaign, party members and volunteers heard from Baroness Jolly who spoke about there being so much at stake for North Cornwall in this election that simply voting is no longer enough.

In a seat where the Green Party has stood aside as part of the Remain Alliance, the contest is widely considered to be a two party contest between the Liberal Democrats and the Conservatives.

Danny Chambers said: “This General Election will shape the country will live in for years to come – there is so much at stake. I am asking for your support and vote to protect our agricultural industry against this terrible Brexit deal, to invest in the NHS, mental health and social care and to be your strong voice in Westminster as someone who understands this climate change emergency and will prioritise action.”

Lord Tyler, former North Cornwall Liberal Democrat MP, said: “Danny’s experience growing up on a local family farm and working as a vet in the area, makes him the ideal candidate to be North Cornwall’s strong voice in Westminster. Danny understands the challenges facing our rural agricultural economy in a way that few other politicians can and is a seasoned campaigner on issues such as mental health, animal welfare and changes to the veterinary profession.”

Dan Rogerson, former North Cornwall Liberal Democrat MP, said: “Since Scott Mann won this seat in 2015, he has stood and watched as the Tories squeezed budgets in North Cornwall. This has left our social care services straining at the seams and an underfunded NHS that revealed only last week that October was the worst-ever month performance-wise since A&E targets were introduced in 2004*. We need an MP who is available, visible and will stand up for the people of North Cornwall and Danny has the compassion and energy to do this.”

* The NHS figures can be found here:
https://www.england.nhs.uk/statistics/statistical-work-areas/ae-waiting-times-and-activity/ae-attendances-and-emergency-admissions-2019-20/